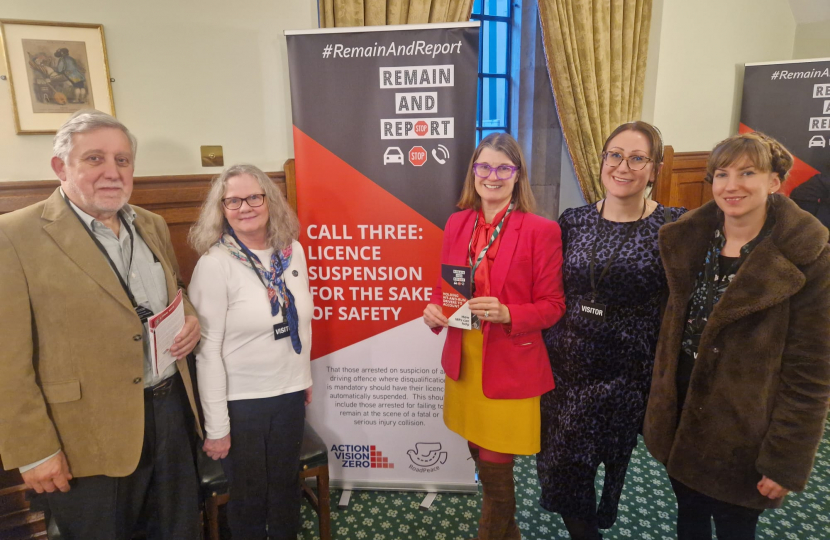 Rachel joined road safety campaigners and bereaved families to raise awareness of the need to hold hit-and-run drivers to account.

Rachel has been working with RoadPeace West Midlands to change the law by creating a new criminal offence of failing to remain at the scene of a fatal or serious injury collision, and reduce the reporting time allowed after a collision.

At the event, MPs were able to talk with those who have been bereaved through road traffic collisions where the driver failed to remain at the scene and why a new criminal offence needs to be created.

Rachel said: “My good friend Lucy Harrison is a tireless campaigner for new, tougher legislation to hold those accountable for failing to remain at the scene of fatal and serious injury collisions. It’s a privilege to work with her.

“It was incredibly powerful for MPs to hear directly from those who have been bereaved through road traffic collisions where the driver failed to remain at the scene about the need for a new criminal offence to be created.

“Progress is always possible, and we’ll keep going until this new offence is on the statute book.”

Lucy Harrison, West Midlands Coordinator for RoadPeace and Councillor for Batchley and Brockhill, said: “Yesterday was an amazing day. I have been working with my amazing friend Amy Aeron-Thomas from Action Vision Zero – we are so grateful to Rachel Maclean for giving so many families the chance to have their voices heard by those who can make change. Having suffered such horrific losses, these families are so courageous in trying to improve the justice system for others. Rachel is a true champion for those bereaved through road traffic collisions, including those where the driver failed to remain at the scene.”