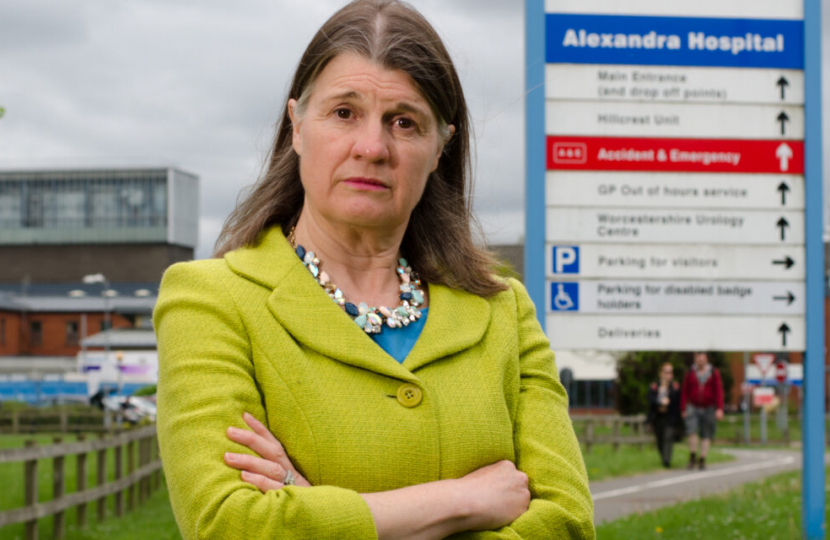 Rachel has expressed her frustration with local health bosses over their timetable for the return of the Garden Suite to the Alexandra Hospital.

Following a successful campaign led by Rachel, back in February the town’s MP secured the commitment from the Trust to return the ambulatory chemotherapy service to the Alex following its relocation to Kidderminster during the pandemic.

Seven months on, and after pressing Worcestershire Acute Hospitals NHS Trust for many months for a timetable for the Garden Suite’s return, Rachel has been told this service won’t be back at the Alex until ‘early 2024.’

Trust bosses have told Rachel that finding a suitable location at the Alex for the Garden Suite has proved challenging because of the number of developments and improvements under way on, or planned at, the Alex, including the enhancements to endoscopy which are part of the Acute Service Review plans.

The Trust has identified a likely location at the Alex which could provide a home for the Garden Suite, but bosses have told Rachel it is not likely to be available until the work on the endoscopy development and the creation of a new theatre assessment unit is completed.

“I am incredibly disappointed, to put it mildly, to have been told by the Trust that the Garden Suite won’t be back at the Alex until early 2024.

“I know my constituents will be frustrated. There is already a deep mistrust in Redditch of local health bosses, and this news won’t do anything to change that.

“They won’t believe the Garden Suite will be returned to the Alex until they see it, and frankly neither will I.

“Almost every week I hear from constituents who are still having to travel to Kidderminster for their chemotherapy treatment. Forcing them to make this journey for another year simply isn’t good enough.

Rachel has urged the Trust to rethink their plan and to ‘think outside the box’ to get the Garden Suite back at the Alex as soon as possible.

“I’ve implored the Trust to rethink this timetable and to think again about how this service can be provided at the Alex before 2024,” Rachel added.

“Given there are mobile MRI and CT scanners on site at the Alex, as well as the mobile operating theatre, why can’t ambulatory chemotherapy be provided in a temporary facility at the Alex until it’s permanent home is available? That’s a question I have put to health bosses and I’m waiting for their answer. The Trust must think outside the box to get the Garden Suite back at the Alex asap.”

Fighting for the Alex

I recognise that the people of Redditch and the surrounding villages have deep concerns about their healthcare services, and they care passionately about the delivery of these services.