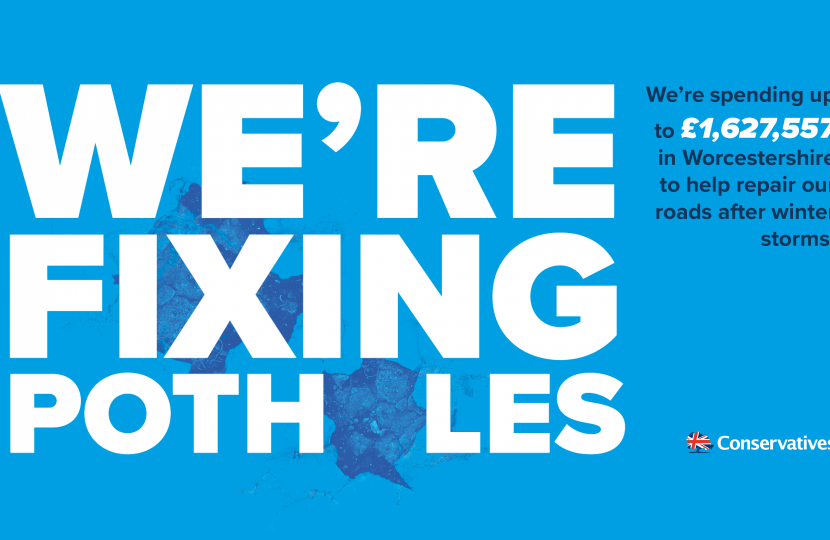 Roads in Redditch which have been badly affected by the recent winter weather are set to benefit from the £1.6million in funding awarded to Worcestershire County Council from the Department for Transport’s pothole fund.

Yesterday (March 26), the Transport Secretary Chris Grayling announced the Government is set to give councils a further £100million to spend on repairing potholes and other storm damage following the recent wintry weather.

This money will help repair almost 2 million potholes as well as help protect the roads from any future severe weather.

The funding announced yesterday is on top of the £75 million in Government funding already given to councils from the Pothole Action Fund this year, as well as the additional £46 million boost for highways authorities announced just before Christmas.

The Government has already provided local authorities with a record £6 billion to spend on maintaining and improving their roads between 2015 and 2021.

Rachel said: “As a resident of Redditch myself I know how much we all rely on good roads to get around our town and the beautiful countryside and so I’m delighted Worcestershire County Council has been awarded this additional funding to help maintain the high standards residents expect and deserve.

“Following the recent freezing weather, I would encourage residents to report potholes which have appeared to the County Council.”

Since I was first elected, I have been holding the bus operators in Redditch to account.

Undoubtedly Redditch’s bus service needs improving, and I’m working with the Government and our County Council to achieve this.